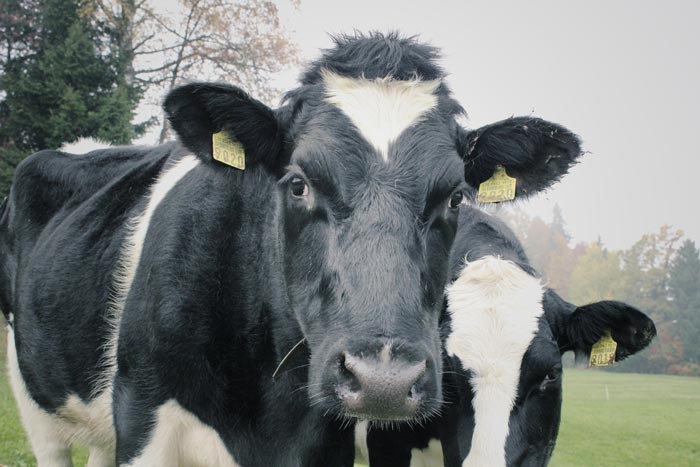 How to Recognize and Treat Cow Milk Fever

Milk fever (Parturient Paresis) or hypocalcemia is a preventable disorder in lactating beef and dairy cows. About five to eight percent of cows get milk fever, making it a common, but hopefully unlikely, the problem in your herd.   Although certain breeds, such as the Jersey and Guernsey dairy breeds, are more susceptible to milk fever than others, any female bovine may exhibit signs of milk fever. It is important to know the signs and symptoms of milk fever as well as the potential causes, so you can both prevent it and treat cows that exhibit symptoms of this sometimes-fatal disease.

What Is Milk Fever?

Farmers have known about milk fever for centuries, but it wasn’t until around 1925 that the cause was identified as a calcium imbalance in the bloodstream. Cows begin producing milk prior to giving birth in preparation for the calves’ first hours of life. The first flush of milk released to the nursing calf contains colostrum, nutrient-rich milk that sustains and boosts the calves’ immune system. Colostrum in dairy cows can contain 20 to 30 grams of calcium. Colostrum production causes calcium levels in the cow’s bloodstream to drop from 8.5–10 mg/dL to <7.5 mg/dL.

About 80 percent of milk fever cases occur after calving, especially among dairy cows. Cows that produce high volumes of milk are most susceptible to milk fever because their bodies can’t replace the calcium lost to milk production quickly enough. To continue producing milk, the cow must continue drawing calcium from her own system. If the cow does not have access to calcium-rich pasture during this critical period or if she has already given birth to several previous calves, her body may not have enough calcium stores to support her during lactation. When calcium levels drop below acceptable levels, the cow’s nervous system and muscles are affected. The resulting symptoms are called milk fever.

Milk fever may also be caused by other factors. An imbalance in the minerals available to lactating cows may cause milk fever. Milk fever can also be exacerbated by an infection — such as in the udder, reproductive system or digestive system.

Stages and Symptoms of Milk Fever

How Milk Fever Is Treated 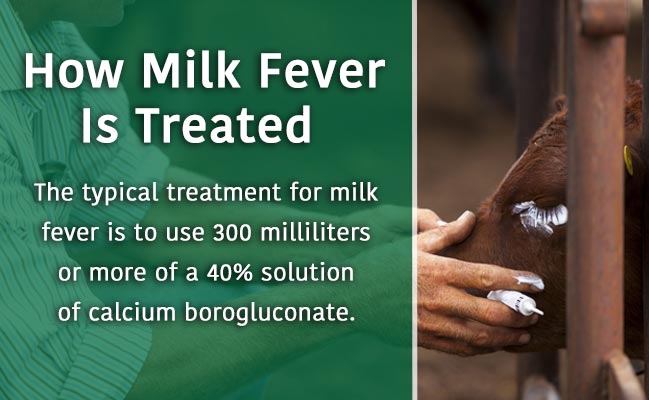 The first step, if you suspect milk fever in any of your cattle, is to call your animal’s veterinarian. They can make the diagnosis of milk fever and administer an intravenous solution that contains calcium and other minerals, if necessary, to balance the ratios in the bloodstream. The typical treatment for milk fever is to use 500 milliliters or more of a 23 percent solution of calcium borogluconate. Other solutions may include so-called “three in one” or “four in one” solutions that contain a mixture of minerals including calcium, magnesium, phosphorous and dextrose. The combined solutions replace the missing calcium in the bloodstream, while also providing other important minerals that may be lacking. The combination can help the cow recover quickly.   Although one 500 ml solution may be used, larger animals may require 600 ml.

The solution must be administered slowly, but once she receives enough of the proper minerals, the cow should be on her feet quickly. She may be shaky and weak for a little while, but she should make a full recovery. Some cows also require a subcutaneous (under the skin) administration of fluid. Fluids are usually not given orally due to the risk of cows aspirating, or drawing fluid into the lungs. The preferred administration is by intravenous solution or subcutaneous administration. This treatment is usually very effective if milk fever is caught in the early stages. Treatment during Stage 3 offers uncertain outcomes. Most cows can recover from milk fever, especially if it is caught in the early stages.

Care Until the Vet Arrives

Intravenous fluids should only be administered by a veterinarian. The risk of making a mistake is too great to do it yourself, and a mistake can kill your cow. There are however, several things you can do until the vet arrives to help your cow.   If the cow is laying down, she can be propped up to prevent or relieve bloat. Bloat occurs when gasses build up in the rumen and are unable to escape. This can occur when the cow lays down for a prolonged period, or when she’s laying on her side after falling down from muscle weakness.

Always check your cows twice a day, especially when you know members of the herd are ready to give birth. Dairy cows are easy to check, since they must be milked twice a day, and they are often trained to arrive at the barn for milking. Beef cows should be checked in the field. A simple head count will let you know if all herd members are accounted for, and if you can’t find a few of your girls, you should walk the pasture to find them.

Cows that contract milk fever and are outside in bad weather should be moved into a shelter to get them out of the rain, wind, cold and snow. This is especially important if the vet cannot get to the farm quickly. The shelter doesn’t have to be fancy. A run-in shed or three-sided shed provides enough cover from the elements to keep her comfortable until the vet arrives. You can also cover the cow with a horse blanket until help comes.

If your cow was comatose, check her nose and mouth for signs of fluid. Animals that suddenly lose consciousness may inhale liquid into the lungs. Cows are especially vulnerable to this because of their unique digestive organ, the rumen, which helps them digest tough grass fibers. Cows regurgitate to move contents from one stomach compartment to another, and if they lose consciousness during this phase, they may inadvertently inhale the stomach contents.   Tell the veterinarian immediately if you suspect your cow has inhaled any liquid. Antibiotics, if prescribed early enough, can also ward off pneumonia caused by inhaled liquid.

Milking Dairy Cows After a Bout of Milk Fever

Dairy farmers treating cows for bovine milk fever can resume milking after treatment. Depending on the farm, some calves are kept on the mother even when her milk is sold. Cows can be such prolific milk producers that the calf can drink his fill while the cow still provides plenty of milk to add to the dairy’s output.   Wait at least 24 hours after the cow has completely recovered from her bout with bovine milk fever before milking her. Do not take much milk during the first milking period, either. Gradually increase the amount of milk you take from her over a three-day period until you are sure she has recovered. Then, you can resume her normal milking schedule.

Caring for Calves With Sick Mothers

Calves that must be removed from their mothers due to milk fever can be bottle-fed. If the calf hasn’t had a first nursing from his mom, he must have colostrum, the rich mother’s milk that is normally produced immediately prior to parturition. You can purchase commercial milk replacer, including colostrum, at a farm store.

Calves should then be fed warm (body-temperature) colostrum from a milk bottle specially made for cows. These bottles hold about two quarts of liquid. After the calf gets his first colostrum, he can be switched to a high-quality bovine milk replacement product. Look for a milk replacer with 25 percent or more protein. Most calves will drink about one quart of milk two or three times a day.

Milk fever can be prevented through a variety of good animal husbandry practices. If you plan to raise calves, the following steps should be taken to prevent milk fever:

Most Cooperative Extension offices have an agricultural extension agent who is both skilled and knowledgeable about farming practices. In areas where raising beef and dairy cattle are the norm, there may even be a specialized ag agent just for the cattle industry. They can advise you on what you may need to do to prevent milk fever in your herd.

A Closer Look at Milk Fever

Why do some cows in a herd come down with milk fever but other cows in the same herd do not? Why do cows on one farm, that may share the same genetics with cows on a neighboring farm, develop milk fever, but those on the second farm do not?   All cases of milk fever are caused by an unhealthy drop in the calcium levels in the bloodstream. Calcium in the blood is derived from calcium in a cow’s diet. Here is how that calcium ratio can be disrupted by dietary changes or choices:

The Prognosis After Milk Fever 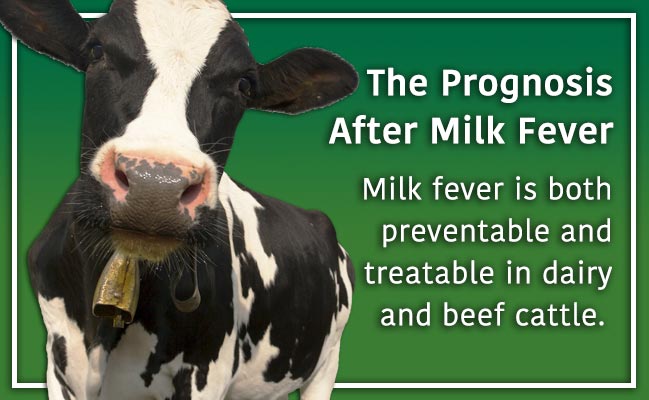 The good news is that if you act fast enough, your cow should recover within just a few hours after the veterinarian treats her with intravenous or subcutaneous (under the skin) calcium. Downed cows will rise, and although they still may be shaky, they will often start to look for something to eat within minutes of successful treatment.

Milk fever is both preventable and treatable in dairy and beef cattle. It affects less than eight percent of cows annually, and the prognosis is good if milk fever is caught early. Keep a close eye on your herd, and do not hesitate to call the vet if any of your cows display symptoms of milk fever and have recently given birth. If treated quickly enough, your cow should be fine, and go on to raise a healthy, happy calf.

Please note that the research you will find upon clicking “continue” is not intended as an endorsement of any product and is provided for informational purposes only. It is also not a substitute for expert veterinary care. This research offered is sourced from scientific journals written by researchers and veterinarians to provide information on ingredients or products for animal health that they have studied.